Is Colloidal Silver Safe To Use Or Will it Turn You Blue?

The remarkable healing qualities of colloidal silver are well-documented and many round the world have testified to its amazing health benefits. Ongoing medical research on the product is carried out by acknowledged medical doctors and research teams providing undeniable evidence of the product’s healing strengths. That said, some people are concerned about the substance literally turning the skin blue. Bruce Cooper investigates.

“A medicine should be pure and safe. Colloidal silver is pure and safe. There is no doubt it kills all the major antibiotic-resistant bacteria found in hospitals because this I have tested myself and found to be true. It is also very effective in treating burn wounds, and there is evidence that it can stimulate connective tissue stem cells and speed up healing. I use it daily and find it very effective in controlling bronchitis when inhaled either from a spray or through a nebuliser.”

Some alarm was recently spread through reports that the continual ingestion of colloidal silver could turn one’s skin blue. 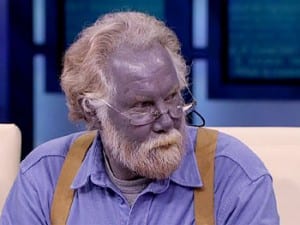 On 27 May 2008, Paul Karason from Oregon, USA, appeared on a very popular American talk-show and prominently revealed his blue face to millions of viewers round the world. The medical term for his condition, Argyria, is described as a medically harmless but permanent bluish-grey discolouration resulting from silver deposits in the skin. The condition has been linked to the intake of colloidal silver although Karason believes it came about through rubbing the product on to his skin while treating dermatitis.

Karason’s television appearance has led to much wild speculation and unauthenticated claims to generally discredit a product which has a proven track record of remarkable therapeutic results. He continues to sing the praises of colloidal silver and claims he will continue taking it.

For almost two decades, Karason manufactured his own colloidal silver and for many years drank a litre or more per day.

Any over-the-counter medication consumed in such quantities is likely to have a very harmful, if not fatal, effect. Poorly manufactured colloidal silver (particularly home brews) taken to ridiculous excess could result in Argyria but will never prove fatal.

Colloidal silver manufactured under strict laboratory standards and taken according to the recommended dosage is a safe and very good product to use.

Most cases of Argyria reported in the medical literature over the last 100 years involved long-term intravenous or intramuscular use of the silver preparations, most often involving a silver drug produced by a pharmaceutical company and prescribed by physicians which in most cases contained silver nitrate.”

Colloidal silver, like any medication, has a recommended dosage. As a permanent immune booster, one can take 10 ml per day and, in emergencies, one can safely take up to 20 to 40 ml per day. These figures are relevant for colloidal silver preparations of 18 ppm (parts per million).

In a long term clinical study (SL-0035-2008), which terminated in early 2009, by LA-BIO RESEARCH on the oral toxicity of 18 ppm ionised silver, it was established that doses of 14 ml per kg per day are not toxic. Colloidal silver is invaluable and perfectly safe to take at the above recommended dosage and strength. If you have taken large quantities over a long period, and are wary about possible Argyria, the following will be early warning signals well ahead of its manifestation.

A slightly blue, slate-blue, or grey-blue colour at the base of the fingernails heralds the first sign of Argyria. Localised Argyria can manifest in the eye from excessive use of silver in eye drops or cosmetic makeup. Patients would be advised to discontinue the use of any product containing silver should any of the above symptoms occur.

Health assessment studies undertaken by United States Environmental Protection Agency health scientists from several Program Offices and the Office of Research and Development, indicate that colloidal silver is safe taken within recommended dosages but patients need to ensure that the product they buy is made within laid-down manufacturing parameters and is registered with the Medicines Control Council of South Africa. Ideal strength for the product is 4-20 ppm (micrograms per millilitre) and should not exceed 25 ppm.